Bergendahls implemented Pick-by-Voice at their central warehouse. Improved working environment and increased productivity are two bonus effects in addition to the 70 percent decrease of errors.

is a part of the family owned Bergendahls & Son AB. The group has a number of business areas focused on consumers and it is the fourth biggest groceries wholesaler The central warehouse with 30 000 m2 and 200 employees delivers daily 70 000 items in addition to full and half pallets. The customers of the warehouse are grocery stores located mostly in the southern part of Sweden.

The competition in the business is extremely hard and correct pricing is crucial for success. As a part of the constant ambition of improving the working environment, efficiency and productivity, the logistics department was looking for new tools for supporting this. The aim was to take the processes, accuracy and efficiency of the central warehouse to an even higher level.

"We had followed the market and technology development and realized that pick-by-voice probably suited our size and organisation well", says Linus Larsson, Logistics Manager at BergendahlsGruppen AB.

Bergendahls evaluated solutions from a number of suppliers and decided to accept the offer from Optiscan.

"They had documented understanding of implementing pick-by-voice for groceries. The pricing was right and they had proven experience of integrating with Aptean - the same WMS-system we are using", Linus Larsson says.

Bergendahls chose to be very thorough in the project that started in December 2008. Representatives from the union, the health & safety representative, the management and eight pickers visited a number of Optiscans´ reference customers that are using pick-by-voice in large scale.

"The aim was to involve as many persons as possible in the project, because we knew that pick-by-voice would result in a big change in the working procedure."

The management was namely interested in receiving as many viewpoints as possible from the employees, and the project was run under Bergendahls own slogan "Smarter. Not harder."

The project stayed within budget in both time and cost. Linus Larsson is more than satisfied with the project members from Optiscan, personal chemistry has worked perfectly and they have made a good impression on Bergendahls.

Already in May 2009 eight pickers were using pick-by-voice on real orders as a part of a two-month pilot project. 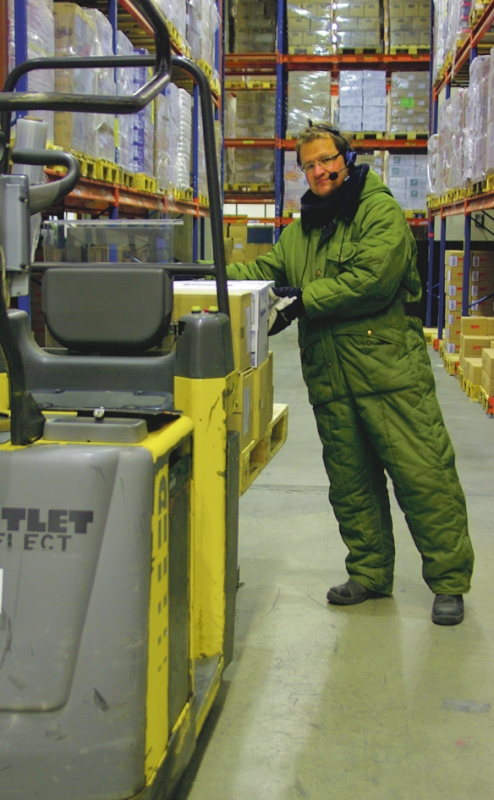 "We wanted to test the system in real life by evaluating the standard product without any adaptations, says Linus Larsson. The pilot project was successful and only a handful minor adaptations have been necessary to implement. The system is very stable and complete."

All pickers are using a Vocollect headset connected to a Talkman communication unit carried in the belt. All communication with the WMS-system is wireless and the picker can use all attention to collect and pack goods since the truck mounted computer no longer is needed. The picker always has two free hands for lifting goods, an obvious ergonomic advantage.

In October 2009 the roll-out of pick-by-voice began in large scale. Bergendahls uses job rotation and according to Linus Larsson it is obvious that the personnel easily adapts to the new way of working, which is a huge benefit for substitute personnel. It is unusual that the beginner want support from the instructor after more than one to two days.

"The solution also fulfils our requirements of scalability. We can easily increase our capacity as the business grows by adding new pickers that can be skilled in a short time."

Linus Larsson estimates that the total improvement in productivity will be 10-20 percent where pick-by-voice for batch picking, i.e. simultaneous picking of several orders, is also implemented.

Besides improved productivity, Linus Larsson sees many bonus effects by introducing pick-by-voice. The working environment for the picker has improved and the errors - in particular wrong product - have decreased by 65-70 percent from an already previously low level. The customer benefit has increased by more accurate deliveries to the grocery stores.

"That is positive for the sales at each store. Our main focus is commercial thinking and to serve our customers, the grocery stores, is our main goal. Therefore it is crucial to deliver the correct products in order to fulfil the consumer´s expectations on our stores", says Linus Larsson. 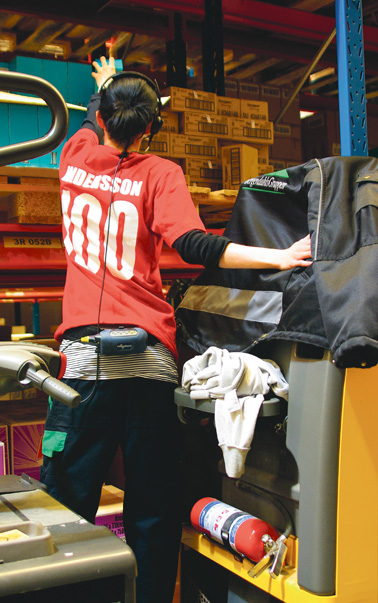