The errors are so few that it´s not worth spending time checking the deliveries at MQ´s stores. A good testimonial for the solution based on Pick-by-Voice from Optiscan.

For 20 years DHL has been the logistics partner to the clothes chain MQ. Seven days a week throughout the year the warehouse in Borås serves 100 stores all over Sweden.

DHLs challenge was to streamline MQs logistics from the central warehouse all the way to the shelf at each local store. Two main goals were identified for the project. Increase the quality of the stock balance in each store - which has a huge impact on sales - and eliminate the time consuming job of checking each delivery.

Optiscan´s part of the project was to replace the printed pick lists with a voice based interface between the picker and the existing WMS-system. The solution was implemented by a project group with Optiscan, MQ and the provider of DHLs WMS-system, NYCE Solutions.

Each picker is equipped with Vocollect's personal headset and voice terminal on a belt. The terminal and the WMS communicate through a WLAN connection.

The picking process is operated through giving and receiving voice commands through the headset.

The picker requests a new order and receives information about the location of the product. At the shelf the picker reads the three last numbers of the product´s EAN-code and the voice system responds with the number of items that shall be picked. The picker reads the same number when the items are loaded into the box. The voice system responds by giving the location of the next item. This procedure is repeated until the order is finished and the picker starts over with a new order.

Optiscan were on location during the whole start-up and was able to adapt the equipment individually for each person. Today the warehouse in Borås has equipment for 27 simultaneous pickers, but the number of educated pickers with voice profiles is more than double.

Stefan Carlsson, responsible for the warehouses run by DHL Storage in Sweden, concludes that productivity went up 5% already two months after introducing Pick-by-Voice. The accuracy of picking has increased from 99,7% till 99,97% , i.e. 90% less errors.


The drop in efficiency during periods with substitute personnel is significantly lower with pick-by-voice and the accuracy of picking is up even for this type of personnel according to the customer.

Errors are so few that it´s not worth spending time checking the deliveries. "We have also noted fewer errors during holiday seasons", saysOlof Jonsson, controller at MQs Logistics Department. Another positive side effect of pick-by-voice is decreased costs for education at DHL. "We need four hours for creating voice profiles and educate a brand new picker. That is significantly less time than before", says Lars Lundgren, responsible for education and IT at DHL in Borås.

"An accurate stock balance is important, since it has a big impact on sales, says Olof Jonsson, Controller, Logistics, MQ. The daily delivery to each store is namely based on the sales the day before.

According to the pickers at DHL in Borås, the biggest advantage is that you have both hands free and don´t need to handle a pen and a printed pick list. Today the workers do not have to fetch pick-lists and perhaps queue at a printer. Furthermore a new order can be requested when packing the previous order.

According to Stefan Carlsson at DHL, the project has stayed within budget both in terms of money and time. There have been only a few problems along the way and Optiscan has shown a good understanding for this type of business. 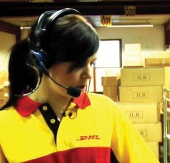 "The biggest advantage is that you have both hands free and don´t need to handle a pen and a printed pick list."