Voice directs picking in the logistics centre of Estonian beverage company A. Le Coq. Thanks to the new Pick-by-Voice solution from Optiscan the picking process is now more efficient, more accurate and the quality is better than ever.

With all its' product categories - beer, long drinks, cider, soft drinks and mineral water - combined, A. Le Coq, owned by the Finnish Olvi Group, is the largest beverage company in Estonia. The company was founded in 1826, and has been a part of the Olvi Group since 1997. In 2010 the company´s total output was 125 million litres and the number of employees reached 312.

A. Le Coq has two manufacturing facilities. The factory in Tartu manufactures all products apart from juices which are manufactured in a factory nearby. The logistics centre is in Tartu and all the clientele is served from there. The distribution terminals as well as transportation in Tallinn, Pärnu and Saarenmaa are outsourced to service providers.

"Logistics plays an important role as the final link in the customer service chain. The quality of picking directly impacts the accuracy of distribution which means customer satisfaction."

The main reason behind A. Le Coq´s decision to invest into Voice, according to Lehiste, was the need to have real-time information about warehouse operations. The company wanted to abandon pick lists on paper which, as an off-line operation is difficult and expensive to improve. Every picker has created their own process, which complicates standardising working instructions. Also, picking lists might be interpreted differently and making notes may vary by picker.

"Geographic proximity was a decisive factor in selecting a system provider, but we were also looking for proof of successfully delivered systems and for after-sales maintenance and support. This is why we chose Optiscan", Lehiste points out.

Lehiste says that the experience with the system after the first six months has been great. Voice now enables shift managers to follow both the progress of the pickers and the status of each order.

"We now have an accurate overview of the process. Picking is faster than before and the quality has also improved significantly. We were pleased with the quality of work before, but now it is even better. Over a very short period the number of picking errors has been reduced by half from 0,08% down to 0,04%"

The A. Le Coq logistics centre employs 27 pickers in three shifts, nine pickers per shift. Each picker has a personal headset and the amount of Voice terminals equals the maximum number of employees per shift.

"The initial user training for Voice took one weekend. Half of the workers were trained on Saturday and the other half on Sunday. On the following Monday they all started their work without any problems", explains Lehiste.

Lehiste tells that the cooperation with Optiscan worked out very well and Voice proved itself excellent in use.

"It is clear that Optiscan knows all the details of Pick-by-Voice and has delivered systems to many customers. Optiscan brought its knowledge of best practices into the project and finding a common language was easy"

According to Lehiste, Estonian companies are innovative and willing to improve their operations. This is why he believes that even more technologically advanced systems will be introduced in future.

"Choosing Voice is simple since it is very easy to use and deploy."

A Le Coq - The company

The Estonian company A Le Coq was founded in 1826 and it is owned by Olvi Group since September 1997. It is the biggest beverage seller in Estonia and the second biggest in the food industry. The gross production 2014 was 151.8 million litres, made by a total of 369 employees.

"We now have an accurate overview of the process. Picking is faster than before and the quality has also improved significantly. Over a very short period the number of picking errors has been reduced by half from 0,08% down to 0,04%." 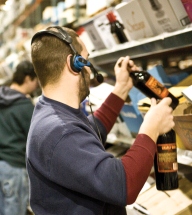