Automotive spare parts and accessories provider Örum Oy spurred its logistics processes to even higher efficiency with a Pick-by-Voice solution delivered by Optiscan.

The picking process in Örum´s warehouse in Espoo covers products from light bulbs and fuses to engine bonnets and exhaust pipes. The warehouse measures 12,000 square metres and holds up to 30,000 storage places and over 70,000 different items. With the new Voice solution over 5,000 lines of customer orders are picked every day.

Logistics Director Teemu Tuomainen is responsible for all warehouse activities. His responsibilities include development of the warehousing process as well as its systems and equipment.

According to Tuomainen well-functioning logistics is one of the key factors of successful business, and the delivery time is becoming ever more critical. The last deliveries of the day leave the warehouse at 19:00 and over-night they are dispatched all over Finland except for the North-most parts of the country. In the morning the spare parts are at local stores ready to be delivered to repair shops.

"Efficiency and accuracy of picking are critical for the deliveries. The customer must get what they have ordered, otherwise the delivery is worth nothing. An exhaust pipe that comes without a proper gasket can´t be installed", Tuomainen explains.

A leap into Modern Times

Örum is now using the second generation of warehouse management system, which proves how important they are for warehouse operations. Örum´s business processes took a giant leap into modern times when Pick-by-Voice was introduced.

The customers use Örumnet, a web-based spare parts ordering system. Örum´s ERP sends an order confirmation to the customer and transfers the order to WMS which, in turn, sends the picking assignments to the pickers and their Voice terminals. "We switched to Voice in order to improve the traceability and the efficiency of picking and the multi-customer picking has especially boosted our efficiency. Work ergonomics and occupational safety have also improved as pickers don´t need to hold and read lists anymore", says Tuomainen.

According to Tuomainen the feedback from the pickers has been very positive: "The personnel have adapted well to Voice and it would be really difficult to take it away from them."

Warehouse Manager Kari Daavitsainen has similar experiences. He says that at first there was normal resistance to change but in the end Pick-by-Voice was adopted surprisingly quickly. "Those who were good pickers with pen and paper also perform very well with Voice. We are very pleased with Voice, it works well for us."

Daavitsainen doesn´t want to go back to the times when shift managers had to fetch picking lists from printers and take them to the pickers. Every order line was on a separate sheet and a 15 lines order meant carrying around a batch of 15 sheets of paper. "Voice reduced the time of training new employees. Whereas before the training process lasted for two weeks, now it is a matter of days", he emphasizes.

Teemu Tuomainen is very pleased with Voice picking and with the results of the project. System availability has been ensured with the OptiCare service and support contract.

"The system we have got is as promised. Optiscan had a very competent project team and the aftercare has been also good. The hardware and the services are functioning as promised," he concludes.

Örum is one of Finland´s foremost providers of comprehensive solutions for automotive spare parts and accessories and is the undisputed trailblazer in its field. The company´s business is founded on customer concepts, reliable logistics, high-quality products and professional personnel.

Örum Oy is a part of the Finnish Mercantile Group, with a turnover of € 85,4 million and a staff of 374 in 2014. Mercantile is Finnish family-owned business since 1901.

Mercantile is Finnish family-owned business since 1901. 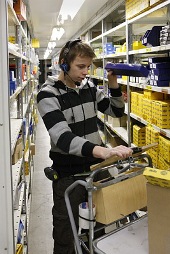 "The system we have got is as promised. Optiscan had a very competent project team and the aftercare has been also good. The hardware and the services are functioning as promised."