Berner's and Optiscan's implementation project of Voice-Directed picking was like a textbook example of a successful implementation. Thorough preparations combined with competent execution made sure that delays played no role in the agenda.

Enholm was in charge of Berner´s manufacturing and logistics until the end of 2009. Prior to his retirement he was responsible for the centralization of Berner´s logistics functions to a new distribution centre at Vantaa´s Viinikkala area. Enholm was succeeded by logistics manager Jorma Okkonen, who also had his role in the project.

"We wanted to build a distribution centre that utilizes advanced technology serving our needs in the best possible way. Already in the planning phase we decided to go from list-picking to voice-directed picking." says Enholm.

According to Enholm Berner saw Voice as a way to decrease errors while simultaneously improving efficiency in the warehouse.

"Errors are expensive. 2‰ wrong shipments doesn´t sound like much but 100 per day is too much."

Imports constitute 80 percent of Berner´s turnover and their own manufactured goods account to 20 percent. Berner´s centralised logistics serves retail, healthcare and sanitation sectors. In their daily work it means receiving, warehousing and delivering of goods.

"Major retailers are our largest customers. Our logistics must be cost efficient and match their needs so that we are able to respond to our client´s requirements." Enholm says.

, the shelving space is and there are 28.000 pallet locations. For small items there are seven automated carousels. Daily order lines picked ranges from 6.000 to 9.000, and some 500-600 pallets are received and dispatched.

The ERP-system controls the carousels, and also picking with forklift PC´s, handhelds and Voice. ERP communicates over WLAN directly with the voice terminals..

Enholm says that Berner wanted to implement systems step by step. The implementation of Voice was scheduled to take place on December 2009. At first stage it was implemented for footwear picking, and the plan is to expand to cover the whole warehouse during 2010. The first new area was already implemented in the beginning of January 2010.

"Since the work with the ERP was already done, we were able to change the picking method on the fly. In the morning we picked with paper lists and in the evening with Voice." explains Okkonen.

"Since the implementation of Voice our productivity has increased 20 to 40 percent. There are specified control parameters for voice-directed picking in our ERP system that creates a work queue for order lines. Thanks to batch picking three or more orders are picked at the same time, the system also optimizes forklift routes." stresses Enholm.

Okkonen says that the statistics for the first month show that picking accuracy has improved significantly. Customer feedback has generated only a couple of complaints on pick quantities. These errors are mostly the result of inexperience of the picker with the new system.

"Voice improves the quality and accuracy of the picking process. With Voice picking is a simple process and the pickers ability to to concentrate on the task improves the quality. Picking with paper lists is clearly slower and the stages of work are more exposed to distraction." says Okkonen.

Enholm says that implementating new systems is often more difficult than expected. Voice was an exception to this rule.

"What Optiscan offered was fulfilled exactly as agreed. Of all the solution providers Optiscan´s performance was the best. Our cooperation has worked very well."

"From the perspective of building a new warehouse Voice was the most easily managed major component."

In Enholm's opinion Voice was sold well to the management as well as to the personnel. Participants for the pilot stage were chosen among the staff and they got to know the equipment first and then conveyed their experiences and trained their colleagues. Therefore Voice was well accepted by the users.

More efficient logistics didn´t mean down-sizing personnel - on the contrary. Enholm says that the number of permanent workers has actually increased. On a personal level Enholm has been able to accumulate know-how about the implementation of the information systems.

"You need to ensure the interfaces between the systems and the equipment. When several suppliers are involved in the project, the human interfaces must also work well and people need to understand each other." he says.

Berner is a Finnish family company that has been building its product brands for 127 years. The goal of Berner operations is sustainable partnership with stakeholder groups.

The company´s main office and product development centre are located in Helsinki, while its two factories are located in Heinävesi and Rajamäki. Berner has subsidiaries in Sweden and the Baltic Countries. 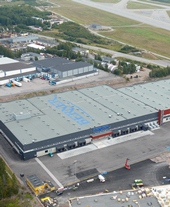