The implementation of voice recognition was a calculated step for Pentik in the process of developing their warehouse management. As the volumes grow the company wanted to make their logistics centre more efficient. With Optiscan Group´s voice solution Pentik upgraded the accuracy and the speed of warehouse picking at the same time.

. Next to the factory is the logistics centre run by 12 employees, nine operators in the warehouse and three in the office.

The Posio production facility is the northernmost ceramic factory in the world. The annual output is over one million articles. The location is excellent for both business and logistics - perhaps unexpectedly.

Pentik´s chain of interior boutiques has put on a healthy growth rate. Last year the turnover was 27.7 million euros, that is 19,6% increase compared to previous year. The same growth level is expected to continue also this year.

"The volume of outgoing goods from the logistics centre has grown about 25% per year. So the implementation of voice is an investment in the future for us, says Harri Bergman", Pentik´s Deputy Managing Director.

In Pentik´s logistics centre two of planned four phases of the expansion plan have been executed. In the beginning of 2006 first of storage space was constructed, and another in the spring of 2007. The next phase of expansion is planned to start 2009.

Winstore warehouse management system (WMS) delivered by Kardex Finland Oy manages warehouse operations. In order to optimize the working process this system is integrated with voice solution controlling the picking process. In practise, this means among other things that once the warehouse worker has completed picking assignment from the pallet area, the voice solution communicates with the WMS, which commands the paternoster system to operate according to the picking assignment.

"Although my expectations were high, our results have exceeded the preliminary estimates", he emphasizes.

Bergman says that voice has improved the picking accuracy and decreased the amount of errors improving the overall productivity. In addition to financial benefits the improvement of ergonomics and work safety has been an important factor.

According to Bergman the cooperation with Optiscan has worked very well. He characterizes the projects with the words easy and swift. The decision regarding the implementation of voice was made in spring 2007, and the system was up and running just before summer. 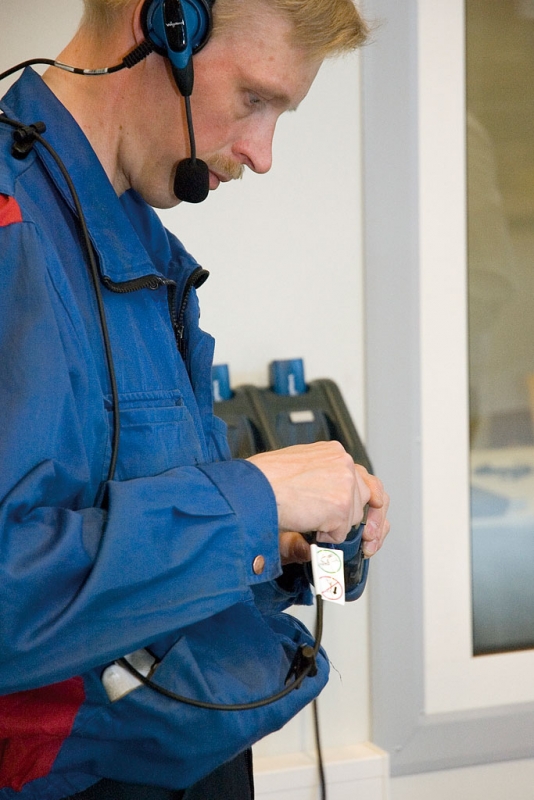