Post Danmark A/S provides postal and related services to individuals and companies. The company merged with the Swedish postal service in 2009 and now forms part of Post Norden.

Providing postal services, which basically involves moving a product from A to B, is a very resource-intensive operation.

In the past all mail was sorted manually, street by street, route by route, for many years. During the last 15 to 20 years, Post Danmark has worked to mechanise the process, and today over 90% of mail is sorted by machines.

However, approximately 10% of mail still has to be sorted manually, either because the address is difficult to read or because the physical format of the mail does not fit the sorting machines. "This last 10% cannot easily be sorted by machine. However the new Voice-Directed letter sorting system from Optiscan makes it far easier to sort letters into routes at the three national letter centres, without a need of employees with local knowledge involved in the workflow", explains Morten Buur, Manager of Development and Support - Letters.

Morten Buur adds that the aim is to provide the letter carrier with postal items finally sorted into the order which matches the best and quickest way to distribute them along the route. "The last 10% of postal items were previously sent to the individual postal districts where employees with special experience sorted them based on years of knowledge of the given districts", explains Morten Buur.

A special department has now been set up in each of Denmark´s three postal centres to manage the manual component of the daily mail. The postal workers who sort these items have been given a headset and a wireless terminal. Employees read the first few letters of the street name on each item, and based on a proven voice recognition system and a database of street names, the system informs the postal worker which compartment the item should be placed in.

"In reality we have turned Optiscan´s system upside down. Instead of picking items from a warehouse, we now fill a shelf with postal items in the correct compartments. Using Optiscan´s Voice-Directed letter sorting system, the employee says part of the street name on the item, and a message is immediately displayed on the indicating the compartment in which to place the item in the sorting shelf."

Implementation of the system at Denmark´s three postal centres in Copenhagen, Aarhus and Fredericia is a result of a joint development process. "We noted that Optiscan had efficient and proven technology that was being used for a slightly different purpose, as they are renowned for having implemented many Voice-Directed logistical systems in Scandinavia.

Optiscan demonstrated during our initial discussions that they understood the issues we were facing, so we agreed to implement a pilot project, which fulfilled our expectations. The result is our Voice-Directed letter sorting system, which makes it simple and easy for our sorting staff to reliably place postal items correctly", says Morten Buur.

Post Danmark´s primary aim was to streamline the mail sorting process. "The level of success achieved has exceeded all expectations", says Morten Buur. At the present he is yet unable to provide specific figures as the system is still very new.

"But I can reveal that we have witnessed major improvements, also in relation to quality. We are also in a better position to smooth out fluctuations in the daily volume of mail, as it is no longer individual employees who are the experts - it is the Optiscan system in cooperation with our own database of addresses", says the Development Manager with satisfaction.

"With the addition of the Optiscan system, all of our postal services are now semi-digital, making it possible for us to offer new add-ons to our services. For example, in the future the system will be able to inform the sorting employee that a given item should be scanned for delivery via email, or delivered to another address. Now that we have data on these items, we can also begin to offer intelligent new services - for example, we can expand our service whereby customers can choose to receive packages from a 24-hour self-collection machine, or at their workplace", concludes Morten Buur, Manager of Development and Support - Letters. 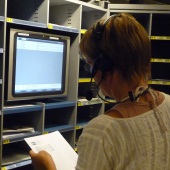